I began school in September 1934, three months into my fifth year of life. The peers I met in kindergarten were pretty much the same kids I said goodbye to 13 years later when we graduated high school. Gilroy was rather static before the war, the population hovering around 3000.

My childhood set me apart from my classmates. This uniqueness had nothing to do with family, race, ethnicity, intelligence, physical makeup, sense of humor, athleticism, sexuality, or politics…. What distinguished me from my colleagues is that they all had front yards where things like lawns and rose bushes grew. 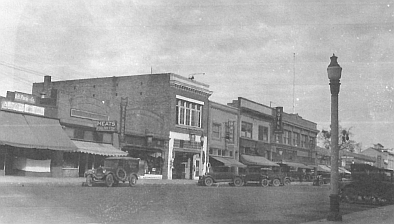 My front yard was a ribbon of concrete stretching from San Francisco to Los Angeles—U. S. Hiway 101. This was before California redirected its major highways around small town mainstreet bottlenecks. The creation of these freeways reduced travel time for highway 101 motorists not inclined to stop at Gilroy’s Milias Hotel where real cream was served with the coffee.

The second effect of this redirection was, of course, to rob my fellow Gilroyans of the sights and sounds of the more affluent and sophisticated world beyond. This wonderful panorama of life-on-the-move featured handsome well-dressed people driving handsome well-appointed touring cars on their happy way to or from places like San Francisco and Santa Barbara, locations as remote to me and to most of my kindergarten classmates as was the moon.

We lived on the ground floor of the two-story Gilroy Telephone Company building. My front yard was U.S. Hiway 101. The street was an integral part of my home’s front room—that is, there was no wall separating indoors and outdoors. Papa’s barbershop stood along the east side of the building, and Mama’s tobacco/magazine stand on the west. Between these two enterprises was a free-standing Hires Root Beer barrel, the first appliance I learned to master.

At night iron shutters were pulled along a track across the void. The two ends of the iron curtain were padlocked for security. The real security, however, was Town Marshall Dick Goodrich, who came by each night on foot patrol to rattle the iron gate by way of testing the lock.

There was no sweeter sound to fall to sleep to….

My immigrant folks started out with a proper house and a lawn on Rosanna Street, but the Stock Market Crash, Papa going into hock to buy a 1929 Chevrolet (which served us to 1947), and my birth all happened at about the same time, so Papa and Mama gave up the rented house with the lawn on Rosanna and took over a set of storage rooms behind the barber/tobacco enterprises. There were two sleeping rooms, and the large space at the rear of the building had a hook-up for a cook stove and running water. Our combination kitchen, dining room, and parlor looked out through an industrial grade laminated window to our backyard—the unpaved alley. Not a single green weed, let alone a lawn, could take root in this sterile wasteland.

Dominating the drab vista was a flight of wooden stairs climbing to the floor above us where the telephone company’s operators, bookkeepers, and the boss, Mr. McAtee, worked.

A tin shed for the telephone repair, installation, and maintenance men took up most of our backyard. I never once was invited into what was, most likely, Gilroy’s rival to the Ford River Rogue Complex. Based on such empirical evidence I concluded that people like the merchants in my front yard who make their living selling things to other people were better company than the backyard people who dealt mainly with fixing thing.

I had friendly relations with the businesses in my front yard. I was never shooed out of a store or told that I asked too many questions. I remember best: the meat market where the Italian butcher would toss me a wiener from time to time; Woolworth Five & Dime where I bought my first book—35¢: a science fiction adventure into the center of the world; the Rocca Brothers haberdashery whose alley trash bin was my main source of sturdy hat boxes; Dr. Priem’s surgery where I parted company with my tonsils; the café where a friendly waiter always announced me with “Piccolo-Rico” (my father’s name was Enrico); Bettencourt’s Market whose produce guy was the first Gilroyan killed in the war; the Flying A gasoline station where the attendant would swarm over a car checking tire pressure and oil levels, and cleaning windshields as standard procedure; Martin Hardware where Mama trusted me to buy—and return safely with—such household necessities as light bulbs, fly swatters, and kerosene (she never asked for the change); the insurance broker where his pretty receptionist, my cousin Catherine, sat behind the plate glass window cutting origami; and, next door to us, Arena’s Drug Store and Frankie Arena: my kindergarten buddy.

I reached the zenith of childhood happiness one weekend while visiting my mother’s bachelor brother, Uncle (in Piedmontese, it was “Barba”) Fred in Redwood City. That kind, gentle soul had bought me a blue and silver Columbia tricycle—top of the line.

And it was mine to take home to Gilroy! The night drive home was a series of falling asleep and sudden awakenings to make sure my Columbia trike, fondly nestled in my arms on the backseat, was real and that together we were safe and happy and ready to undertake a mechanized exploration of the whole of our front yard…

The next morning was my diamond in the sky. I drove my trike down the dark corridor to the front of the building. The iron shutters were open, and beyond them Hiway 101 was bathed in a gentle rain, the first of the autumn season.

And the wet roadway gave a new voice to the passing Lincolns, Cadillacs, and Packards—the low notes of the violas and muted brass that had always been there, were now joined by the slap, slap, slap of windshield wipers keeping time. The high-pitched addition of gently squealing tires on wet payment—clarinets, flutes, the elevated range of the strings completed the heavenly symphony.

Years later I read and understood the reaction of Greta Garbo in sunny Hollywood, homesick for the inclement weather of her native Sweden: she burst into tears when unexpectedly a rare Southern California storm caught her outdoors.

I have experienced 80 such rains, and the reaction is always the same: exhilaration—longing to re-visit my brave new world: a sweet remembrance of a feeling that I was about to explore every corner of the universe—a wonder-filled time and place. Papa in his barbershop, head bent, cleaning his new electric clippers, then looking up and smiling at his American son; Mama hurrying after the blue and silver Columbia three-wheeler, waving a sweater for the transcended pilot of the wonder machine. She lovingly admonishing about rain….

Thank you, Mama and Papa for making me an

Scroll back to top