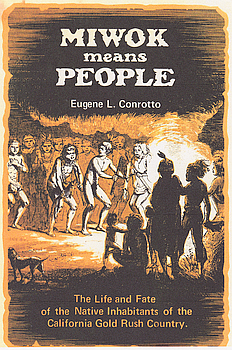 Miwok Means People, out of print since the 1970s, has been reprinted—and is also available as an eBook!

Imagine you live in a self-contained village where your parents and their parents and all your forebears from the beginning of time have lived.

Imagine that within a day’s walking distance from your village are the villages of other People—to the east and west and north and south.

They are PEOPLE because they speak words you mainly understand. There are in these foothills 9000 such PEOPLE.

Then imagine that in the space of a few months 90,000 ûyeayû—white men—come uninvited to all the PEOPLE’S villages to tear away the ground under the PEOPLE’S feet looking for rocks.

For each one of you there are 10 of them. Imagine!

[We get commissions for purchases made through this link, but your price remains the same.]

All formats available through Amazon and NOOK.

From the original dust jacket:

“The Miwok people were one of many tribes who lived in California for cen­turies before the white man came. The Miwok’s home was in the gold-laden foothills of the Central Sierra Nevada range. This is their story as it has never been told before.

“Miwok Means People contains a new and refreshing appraisal of Miwok life before it was rudely and completely dis­rupted by the influx of gold-seeking ’49ers. It often is in sharp disagreement with the distorted  impressions recorded by early writers, almost all of whom arrived well after the Gold Rush and observed a culture in total disarray.

“The author’s research revealed ample evidence that Miwok life was in complete harmony with nature. They knew the flora and fauna of their world and from them harvested the needs of life:  food, clothing, shelter, tools, and medicine. They knew little of starvation, wars, or weapons of war. Their games were simple but pleasurable. Their medicines were innumerable and apparently ade­quate until the white man came.

“This book provides a new depth of understanding and an insight into the true Miwok way of life—a fundamental, uncomplicated way of living which holds increasing attraction for many today.”

This site uses Akismet to reduce spam. Learn how your comment data is processed.