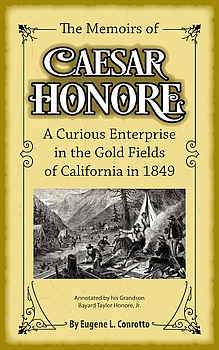 August 1849. A young Bostonian’s fate is sealed less than two hours after he lands in San Francisco. Judge Hyrum Milton has a “curious enterprise” for the newly-minted parolee: disassemble the beautiful red-and-yellow-lacquered made-in-China Vista Del Mar bawdy house in Monterey (where the California Constitutional Convention is taking place) and reassemble it as the Vista Del Monte in the vortex of the California Gold Rush, Sonoran Camp.

[We get commissions for purchases made through this link, but your price remains the same.]

Available through Amazon and NOOK.

The Memoirs of Caesar Honore is the long-lost journal of a early Californian who didn’t go to the mines—but had considerable adventures just the same.  It is “annotated” by a grandson decades later, whose notes add context, corrections, and poignancy to the tale.  (The printed format integrates these notes more naturally with the text, making for a more natural reading experience.)

Q:  Where did the idea for this book come from?

A:  I first met Erle Stanley Gardener in 1961. At that time I was editor of Desert Magazine and Mr. Gardner had provided me with galley proofs to edit of his forthcoming book, Hunting the Desert Whale. We talked often, naturally, about writing, and when he learned that I had lived in Sonora and was planning to return to the site of the tumultuous 1849 gold rush, he made an offhand suggestion: “Write a fictitious Gold Rush journal, and have that person’s descendant annotate it. A writer could come up with all sorts of twists and turns—and mischief—in the world’s first international gold rush.”  — ELC

Q:  Which actor/actress would you like to see playing the lead characters?

A:  The lovers in the movie Brooklyn, Saoirse Ronan and Emory Cohen.

A:  It is the only way one can speak from the grave.

This site uses Akismet to reduce spam. Learn how your comment data is processed.