Carl Sagan was asked if he could go back in time to visit one place on earth, where would he go?

He chose the Great Library of Alexandria.

From its founding in 300 B.C. to its destruction in 400 A.D, the Library was the major center of scholarship in the Ancient World. Any book found on a ship that put into port was taken to the Library where it was copied, the original kept in the Library and copies returned to their owners.

Hypatia, a native of Athens and daughter of the Greek mathematician Theon Alexandicus, was head of the neo-Platonic school at Alexandria, where she taught mathematics and philosophy.

Hypatia’s teachings ran afoul of Cyril, Bishop and later Patriarch of Alexandria. Through his preaching he incited fanatic Christian monks to murder Hypatia by flaying her flesh with sharp oyster shells (the prescribed punishment for “heretics”) and burning her body.

The Library itself and its priceless trove of knowledge was burned. The Christian church canonized Cyril.

He lived his life two decades at a time. 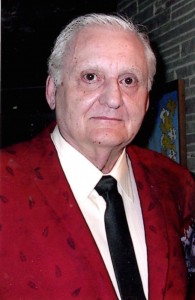 For the first 20 years he was a student, that experience culminating in a degree in anthropology from Stanford University.

For the next 20 years he was a journalist in the California desert: editor of the award-winning Desert Magazine. His first book—Lost Desert Bonanzas—came from this experience.

The third 20 years of his life saw him return to the classroom as a teacher. Hence: Classroom Strategies for the Subversive English Teacher.

The fourth 20-plus years were spent in blessed retirement, the chief joy of which he found was “one no longer has to take orders from idiots.” (He did not consider the spreading of good cheer to be among his responsibilities.)

Conrotto is also the author of Miwok Means People, The Memoirs of Caesar Honore, An Annotated Chronology of the California Gold Rush, Notes on My Stay in a Convalescent Hospital, Avanti America, A Day with the Ant-People, and A Chronology of Unitarian-Universalist Celebrated Individuals.

No less a writer than Erle Stanley Gardner (he of Perry Mason fame, et al.) had this to say of Mr. Conrotto:

I have had contacts, both direct and indirect, with Eugene Conrotto for many years. I have known of his activities both as a writer and an editor, and I regard him as a very talented individual with a down­ to-earth practical approach to the whole subject of writing which will be of great value to anyone interested in magazine writing.

I have a feeling that Mr. Conrotto would not only be good in a classroom, but that the type of instruction he would give pupils would be a mixture of applied journalism and a theory of writing which would make successful authors out of students. 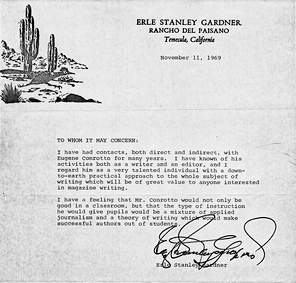